I don’t know when emojis hit the world and took off like a firestorm, but I do know that these little Japanese creations seem to be unstoppable now. Rarely does a given day go by where there’s not at least one emoji gracing the screen of my phone via text message.

And that’s more than okay. They’ve earned that right, in my opinion.

It wasn’t that long ago that I was one of those naysayers rolling my eyes when someone would send me a bunch of emojis rather than just spit out the words that they were trying to say. After all, I’m a proud English Major and lover of words, so I can understand where my snobbery came from.

But things change, especially when your life and very foundation blows up. 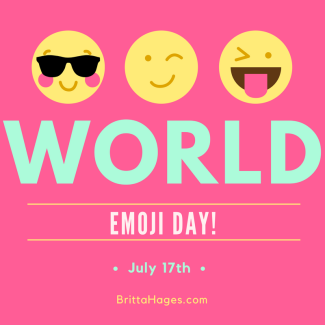 As many of you know (okay, so maybe only one or two of you are regular readers of my blog – if that), my twin brother was murdered this past December. And with that came total destruction of my carefully laid out world.

I lost my brother. I lost my nephew. I lost my parents, to a certain degree. I lost my job, my apartment, my give-a-fuckedness, and, for more than a little while, I lost my mind.

To be completely honest, I lost everything. Well, everything that seemed to matter and, again, to be honest, I shed a lot of the things that really didn’t matter, too.

During this time, I only spoke to a select few, deeply close friends and my immediate family. That’s it. I didn’t care about being pleasant or putting up appearances – I just didn’t care about anything beyond the pain of my mom, dad, nephew, and myself. When a loss that’s so close to the very soul of who you are hits you, there is nothing left but guttural outcries – which means you don’t have the capacity to function outside of the bare necessities, if that.

So, during those early days of death’s shadow, I didn’t really want to talk. I certainly didn’t want to text or email or IM with people. But, people being people, reached out. Sometimes with sincerity, sometimes with absurd or morbid curiosity. Whatever the case, I had both too many words and not enough all at the same time flowing through my mind.

And that’s where emojis pop in.

At first, I used a lot of heart emojis. Then they evolved to crying emojis. Maybe a little or a lot of both. I just remember that before Blake’s death, I only ever used the laughing ones, then suddenly I found myself using nauseated ones and sad ones and angry ones and on and on and on.

But when people asked me awkward questions or made leading statements or just plain offered up their condolences, emojis were really all that I had to fall back on. I mean, you can’t say, “Thanks for being sorry my only sibling is dead.” Or, “No I don’t want to make up a playlist of sad songs that remind me of my brother to give to you.”

Yeah, that last one is just as true as the first…

One thing I can say about death, is that people don’t know how to act. They’re either super uncomfortable or, in my opinion, maybe a tad bit (okay, a lot of bit) too comfortable. That’s why, it’s so hard to react. Because you haven’t been in this situation before (hopefully) and neither have they or they have and they think they know the deal Lucille – but a lot just don’t.

So, emojis saved me from having to be awkward. Instead, they helped me to sum up the conversation and shut it down quickly – which is just what I needed. You’re sorry – great, I’ll send a yellow heart. You want a playlist – great, I’ll send a broken heart and let you put together the rest of the story. You want to know how I’m feeling two days after my brother died, on Christmas – just perfect, instead of sending you the cheerful Santa you sent me, here’s another broken heart. Oh, someone at work complained that I’m not smiling enough and it makes them uncomfortable – I don’t think there’s even an emoji for that… Well there is, I’m just too much of a Christian to use it. Or maybe not, afterall, I’m pretty sure I used the prayer emoji numerous times recounting the complete and total lack of basic human compassion from that shocker.

But you get the picture, right? (Literally.)

Emojis, to me, were the drop the bullshit button. It was what I needed. It was everything I couldn’t say and everything I wanted to say, all rolled up in one superficial face.

So there you have it. I’ve heard people say emojis are a language unto themselves, and maybe they are and maybe they aren’t. I don’t really care. What I do know, is that they gave me the tiniest bit of reprieve from social formalities during some of the darkest days of my life.

Catch Me a Dream